*Please note this post is graphic and not well written. It is an irate rant! I have since spoken with one of the owners and they assure me the head is not from a black man but a Russian (seriously? – so that makes it all better?), they say they had no knowledge of this display and suspect a visitor must have changed it.

I have lived in British Columbia most of my life and am thankful, that whoever created this display is the exception and not the rule!

Please know I considered removing this story but have decided to leave it public. Even though I struggled with that decision I feel it is best to keep it posted for numerous reasons. If you have discovered anything that you found discriminating or derogatory in your travels in Canada please pass it along to me – I am curious to see if Tasteless Tourism happens elsewhere.

Today was supposed to be spent  filming landscape at Mount Revelstoke National Park in British Columbia. Short on time due to congested Alberta traffic, my daughter and I ate lunch at an over priced Italian restaurant in Revelstoke, did an about face and decided we would attempt the project on another day.

Rather than allow circumstance to dampen our spirits we decided to stop, on our way home, at the stunning property of the Three Valley Gap Lake Chateau and Ghost Town; and I wish we hadn’t! 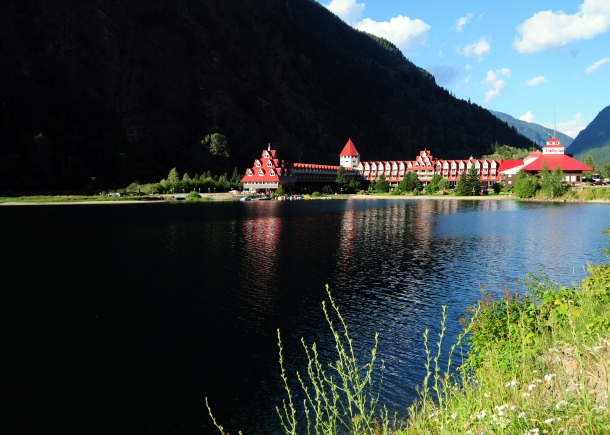 I intended to write a marvelous story about this world renowned attraction and share some fabulous imagery; but in light of what I discovered there, I can’t bring myself to say anything positive at all. In fact, I shouldn’t even be writing this because it will draw attention to them – but I have to because I am appalled!

I approached the ticket booth, explained to the gentleman attendant who I was and my intent. He was quite happy to have me promote the property, explained stops we should make during the tour of the town; smiling wryly as he explained to my daughter she may discover ‘spooks’ on the Ghost Train in the Round-house.

My daughter and I contemplated his use of the word and chalked it up to his age as we entered the belly of a glamorous property that is home to one of the most horrifying displays I have ever encountered in my life.

As I entered the spooky exhibit meant for children, I was greeted by a Halloween prop – no harm, nothing jumped out and startled me as expected and the display seemed nothing a Canadian child hasn’t seen before. 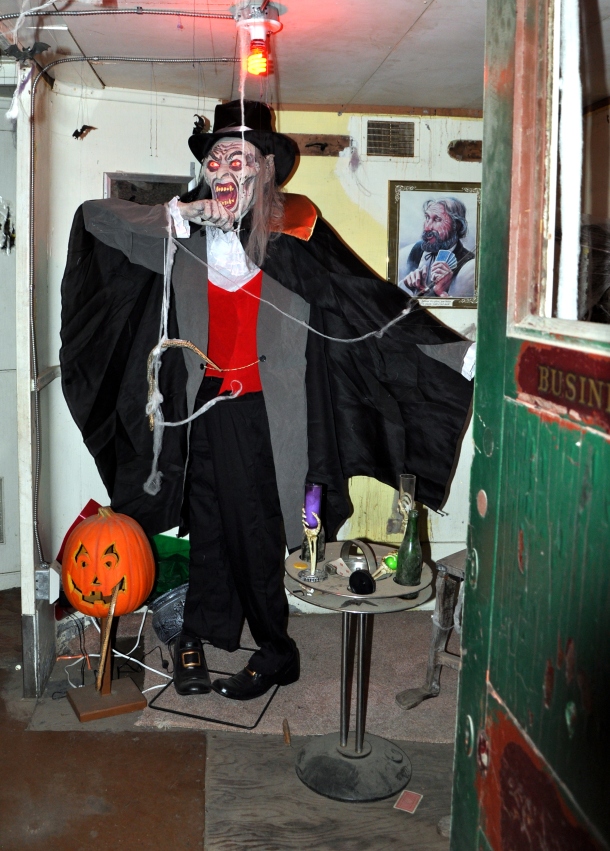 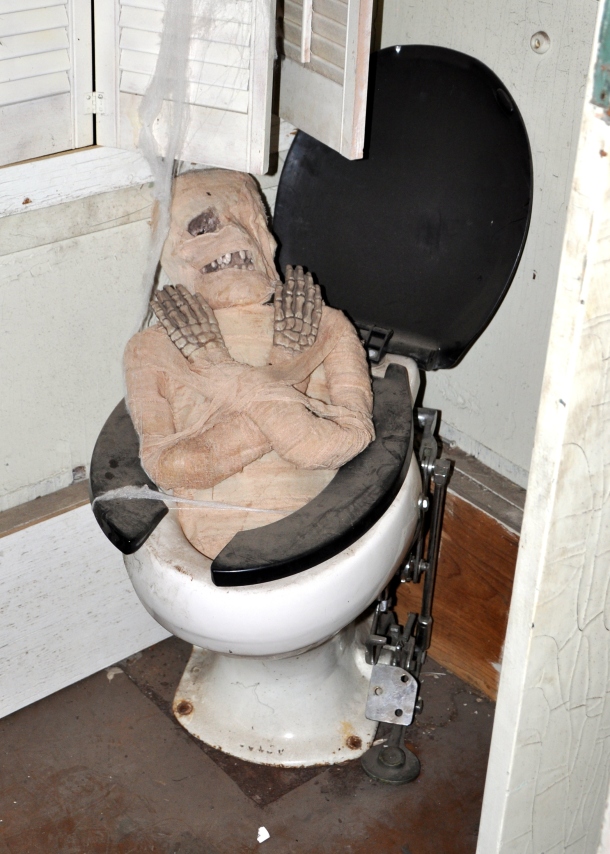 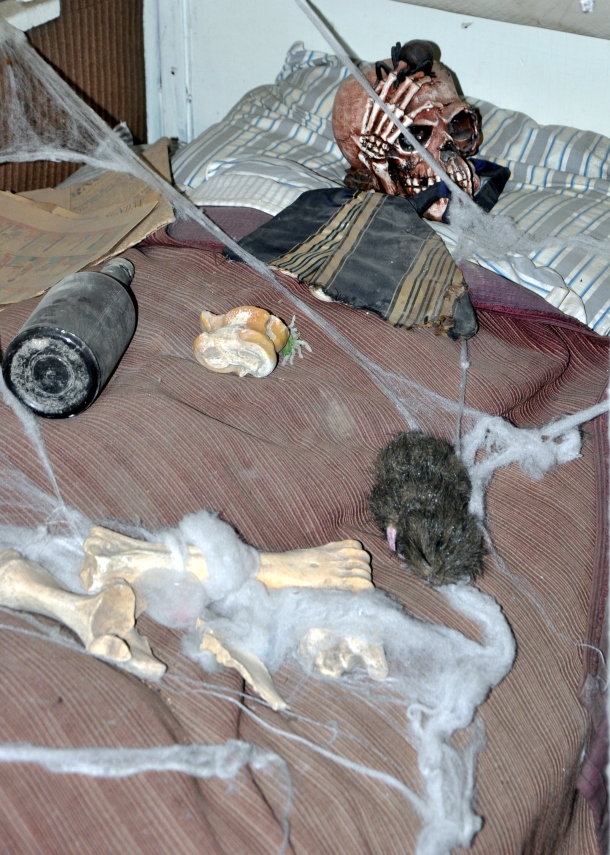 As I made my way down the length of the Ghost Train the props became increasingly morbid and I wondered why a disclaimer hadn’t been posted warning parents with small children. 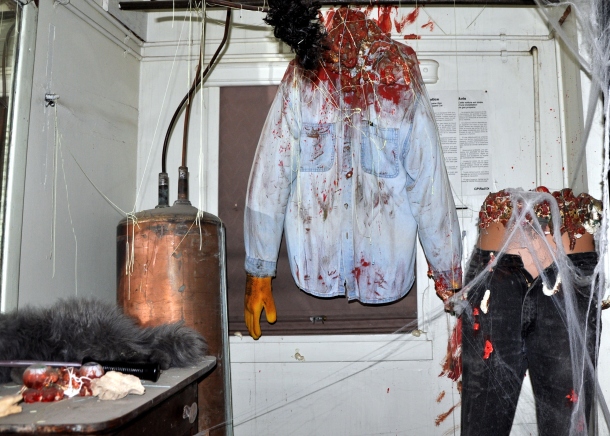 I was becoming disturbed just thinking how a small child would feel in this dark, spooky, claustrophobic train – when I heard the couple in front of me say “Do you see that? It’s the KKK,” just as my eyes came to rest on a staged scene of a child with bound hands and a gagged black child! 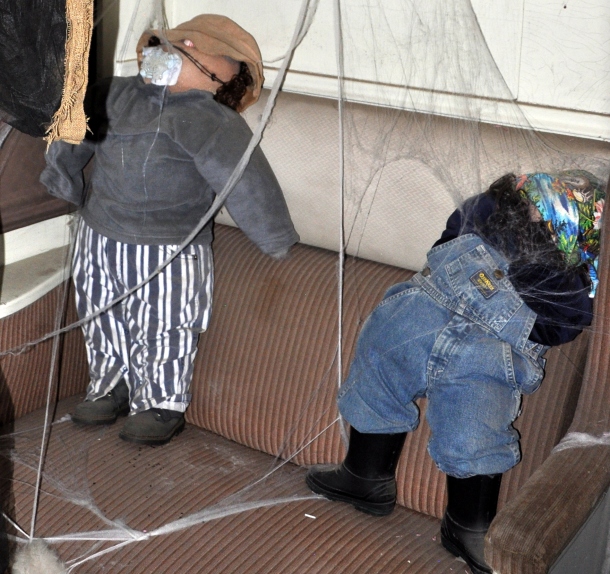 Let me tell you I was sorely unimpressed as I muttered my way around the next dark corner to see what the woman was talking about. You can’t even imagine my horror and shock! The room was so dark I lit it with my camera flash and in that split second a Clansmen’s robe glowed in the light – but my mind caught something my eye didn’t see and I lit my lighter to be sure I was registering what I thought I saw.

I did, and I was utterly livid. Appalled! Disgusted! Freaking mortified! This was the icing on the cake to the bound and gagged children.

This graphic display wasn’t funny or scary and I don’t believe it was in jest. Most certainly not acceptable off-the-cuff-humor. I found no mention of historical significance and had tears as I tried to justify it away, thinking irrationally that perhaps the owners were against racism and cruelty and attempting to portray that in this display.

Even if this were so, there was simply no need to display a decapitated black man, whose hands had been severed at his piano and whose head, with the most painful expression on his face rested on the blood spattered keys; the robe of a Clansman towering over him in superiority. 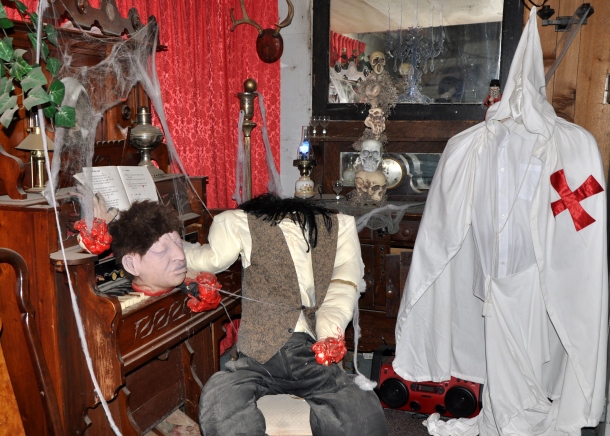 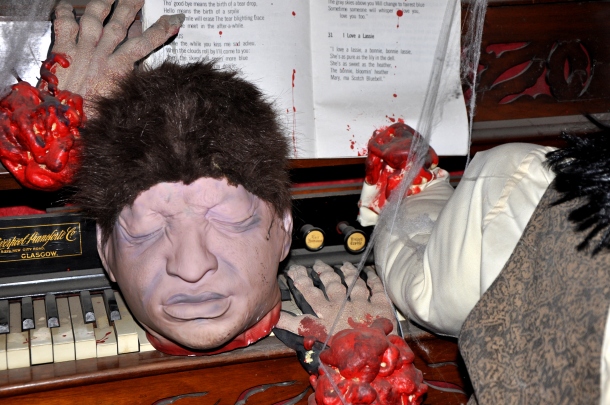 This was not a Ghost Train but a Racist Train, and a very tasteless tourist attraction!

This little secret, hidden in the annals of a luxury resort speaks volumes of disrespect to African Americans who were pivotal in building this Province, those who are tourists, those who survived slavery and those who did not. It is a blatant slap in the face and uncalled for, and I pity the small children who will have nightmares here-after.

On behalf of us British Columbians who have a heart, and there are more of us that do than don’t, I apologize for this blatant disregard and ignorance! And hope, that the owners of this property burn that crap before they do more harm!

Please share this post and write to the owner’s on their facebook page so we can put a stop to Racism and Tasteless Tourism in our province!