Winning My Destination’s Biggest Baddest Bucket List may be more than a dream come true for winners Alex and Marko Ayling from San Diego, California, it may just change their lives forever!

These “Vagabrothers” are about to embark on a six month, all-expense paid journey around the world and they are taking us with them!

What do they have to say about the BBB experience, pre and post win? … Let’s find out!

Q: Alex and Marko, how did you hear of My Destination’s “Biggest Baddest Bucket List” competition and why did you enter? In your heart did you feel you had a chance of winning? – there was some serious competition out there.

A: We heard about the contest through Twitter, and it struck us as a sign of fate.  We’d both been working on our creative careers (filmmaking, presenting, and writing) while teaching English in Spain for the last few years, and we’d spent the last half year putting all our hearts and souls into our website vagabrothers.com and YouTube Channel, Vagabrotherstravel.  Progress was steady, but slow, so when we saw the contest we knew – this is our chance.  There was no choice but to give it all we had.

Q:  What was the first thing that crossed your mind when you were chosen the winners and how did you celebrate?

A: Total shock.  The reality of winning is only kicking in now that we’ve started the journey itself!  The prize is so incredible, it’s almost unfathomable.  So we celebrated by coming back home and spending time with friends and family, knowing that we’d be gone for a while.

Q:  Prior to the BBB, where was the one place in the world you dreamed of visiting and would have moved heaven and earth to get to?

A: We’re both stoked on Bhutan – that mystical Buddhist kingdom that sits atop the Himalayas.  It’s the only country whose government focuses on maximizing “Gross National Happiness” instead of GDP.  It’s also extremely inaccessible and isolated from foreign influence, so it would be an amazing place to visit. 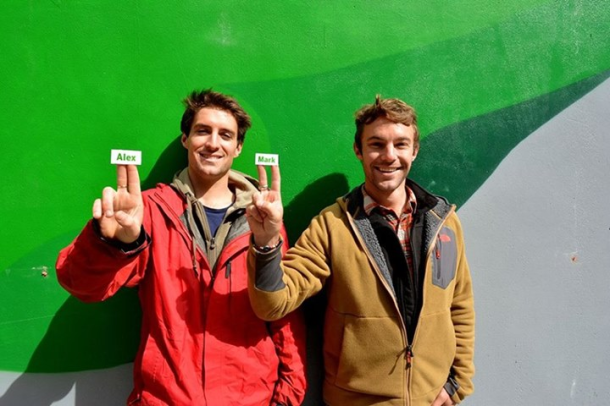 Photo Credit: MyDestination (Alex and Marko in the UK during the finalist round)

Q: What is the most unforgettable experience you had in the U.K. and are the My Destination BBB staff as crazy-fun as we think they are?

A: The MyDestination BBB staff are super fun, and we’re really happy to be working with them.  They showed us many great things in the UK, but walking on fire will be hard to forget.  It was nothing like we expected.

Q: Did you burn your feet walking on coals and did you develop some life-long friendships with the other contestants?

A: No burns,  it didn’t hurt, nor was it an act of bravado.  It was something much more spiritual.  We really had to silence our fears and doubts and literally will ourselves to do it.  And that is a lesson we can apply to life. We made a lot of new friends.  Every finalist deserved to be there on different merits, and it was really inspiring to find ourselves among such talent.  We’re in contact with everyone and excited to see where life will take us all over the coming years.

Q: I understand you’ve been chillin’ with My Destination British Columbia and are beginning your journey in Vancouver, B. C., Whistler and the Fraser Valley. Since you’re from the west coast, do you notice any cultural similarities and is it a place you could see yourself spending more time?

A: Hmm…broadly speaking, I think you could say there’s a “West Coast” accent that extends from our hometown of San Diego all the way up north.  But the First Nations culture is very vibrant in BC, and unfortunately that is quite different than back home.  We both love snowboarding and the outdoors life, so could definitely see ourselves spending more time here – but we haven’t survived a Canadian winter yet, so it’s too early to say!

Q: Your itinerary is being kept secret to keep your fans wondering – can you give us a little teaser?

A: We go to six continents in six months.  Antarctica is not included.  ; )

Marko: I always carry a pen and notepad to scribble down my thoughts.  If not, I go mad.  My most prized souvenir is certainly my least favorite – I once contracted swine flu in Beijing and spent about three weeks in a hot fever, convinced I was going to die.  But that horrible experience supposedly prevents me from any future outbreaks, and so I value it immensely.
Alex: Hand sanitizer.  When it comes to hygiene in some parts of the world, it’s better safe than sorry.  My most prized souvenir is a small effigy of pachamama given to me by a child in Ecuador as a good luck souvenir before heading into the Llanganates to look for lost treasure (long story).

Q: Two people travelling as one unit can often times be frustrating. How do the two of you compromise on activities and destinations?

A: We’re not gonna lie: we frustrate each other constantly.  But gradually we are trying to shift away from thinking in terms of either “my way” or “your way” towards a more healthy “Yes this…and that” attitude.

Q: As “Vagabrothers”, Alex is the outgoing outdoors-man and Marko the reflective writer. How does your individual style complement the other and how will it relate to the content you provide your fans?

A: We’ve always been really different, and it’s only recently that we’ve come to realize that our differences are our greatest strength.  Marko has always been a bit of a bookish autodidact, while Alex is extremely athletic and energetic.  Now we’re both a bit of both.  When you combine a thirst for knowledge with a hunger for sweat and adventure, you get some great symbiosis – and an interesting show.  That’s what we aspire to achieve.

Q: What do you think will be some of your initial experiences?

A: We’re going to the great Pacific North West, so it’s got to be something outdoors, right?  And we can’t leave without paying our respect to the First Nations cultures and their traditions.  Pot-latch anyone? 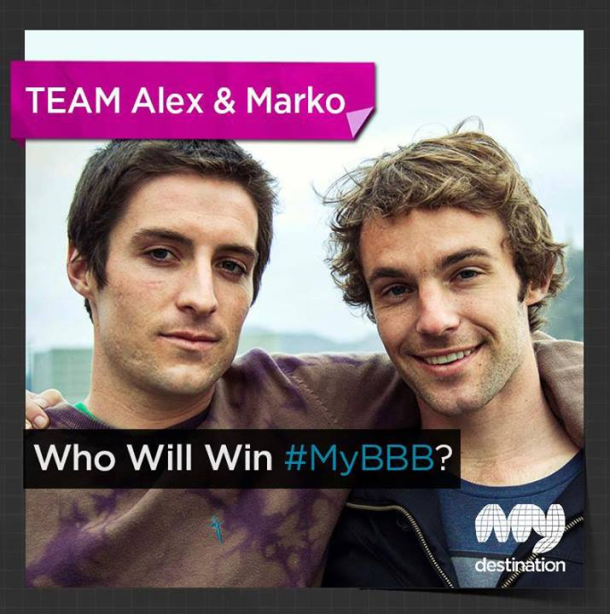 “The Vagabrothers” Winners of the BBB

Q: What inspirational content will be created about your destinations and what is expected by My Destination?

A: The inspiration comes from the trip itself – the act of realizing that we only have a short time on earth to accomplish our goals and dreams, whatever they may be. As far as what MyDestination expects, our charge is to document our experience, transmit it to others by videos, photos and blogs, and hopefully inspire others to start ticking off their own bucket-list.

Q: How did you decide your round the world itinerary? Was it mutual or did you have to battle it out a bit?

A: The two of us are rather on the same page when it comes to destinations.  In the end, we only compromised with the reality of going to 25 places in 25 weeks.  Even then, we think you’re going to be surprised by just how far off the beaten path we’re going to get.

Q:  Where have you traveled prior to the BBB?

A: We traveled a lot as kids, because our father was from New Zealand and our mother was an airline stewardess for PanAm, and then Delta.  We went down under to visit our Kiwi family and we flew for free with mom, so we were lucky enough to see Europe when we were younger.  After college, Marko worked and traveled in Asia, while Alex worked on documentaries in Ecuador and Namibia.  We’ve both taught English in Spain for a few years while taking off on other adventures – Alex biked around the Pyrenees from the Atlantic to the Mediterranean and back, while Marko has made two attempts to sail around the world.  He got rather far, despite having very little sailing experience!

Q: Now that you have won the BBB, can you answer your own question, “What happens after your dreams come true?” Do you think you will end up relocating to your favorite country or will you end up back home?

A: We’ll answer with a quote by Alexander Graham Bell: “The achievement of one goal should be the starting point of another.”  This contest has opened our eyes to the possible, and we spend virtually every night cooking up cool ideas.  And while it’s really too early to tell what comes next, it’s probably safe to say we’re going to steer away from familiar territory for a while.

Q: After this journey is over, do you think you will have fulfilled your bucket-list or simply made it longer?

A: True, we will have pulled off so many of our goals, but the human mind doesn’t like to live without dreams.  It’s part of human nature.  Once a certain set of goals is accomplished, it frees up our minds to conjure up visions of something different.  That being said, each moment of the trip is a chance to check off another bucket-list item, so it must be savored and appreciated, not spent thinking about what comes next!

Q: How do you handle celebrity status?

A: Gratitude. If we receive external praise for our accomplishments, we use that moment as a chance to be thankful for all the experiences that allowed us to get where we are.  We just hope that in gaining a bit of the spotlight, we can use it to inspire people to fulfill their own dreams.

A: Well, we’re going to split it down the middle, then give a chunk to our charities of choice: KiVA, a micro-lending NGO that helps people in the developing world get low-interest loans to start up their first business; and the Enduring Voices Project, a National Geographic initiative which is working to save endangered languages from extinction. Enduring Voices actually does a lot of work in British Columbia, their indigenous languages are some of the most severely endangered tongues on the entire planet.

After that, the rest will be used to fund upcoming adventures!

Q: Do you prefer to travel alone or together?

A: We used to prefer traveling solo, because we both need our alone time and it forces you to talk more to strangers and communicate your experiences more vividly through film or writing.  But now we travel together all the time, and it will be hard to part ways.

Q:  And finally, do you have room in your carry-on for a stow-a-way – namely me?!

A: Unfortunately, there’s not enough room with all our camera gear! But we’re happy to meet people along the way – just Tweet us at @vagabrothers!

* If you would like to see what craziness Alex and Marko are up to on each leg of their RTW journey, please follow along  by subscribing to MyDestination.com’s new BBB TV Channel!