“Look Before You See”. I don’t recall who said this but, I do know it was some brilliant photographer’s advice.

My friend and I were invited to a doll show at a beauty salon. “A doll show?” Porcelain, cloth, buying, selling? … No idea. We arrived early in hopes of capturing a few shots before the masses congregated. My friend who halied from an island in the Caribbean where superstition and voodoo are terms that still commonly roll off the tongue, was somewhat tormented at the energy created by the display; a Quantum Concept I believe.  His camera stayed hidden well in to the night.

It was dimly lit. Pink yarn was strung from wall to wall. Hanging by these stringers were dolls. Modified Barbie types strung by nooses around their necks; a Torontonian artists interpretation of ?… At the time, we had no idea of what. The artist never attended so I wasn’t able to pump his brain. To say the least it was one spooky atmosphere. Spooky as hell but intriguing!

My friend was in a panic and wanted to leave, but we politely sat. He shivering, me musing and shivering. The following images are my interpretation of that evening. What started as though we had walked into the annals of someone’s tortured mind, turned out quite exciting!

I have since titled this exhibition – Death to Artificial Beauty

Feel free to comment if you find other suitable titles for any image…it could prove fun! Perhaps after contemplation you will see something different from I.

I saw, ‘Death to Artificial Beauty – Because What You Wish To See – May Not Be Who I Am’ 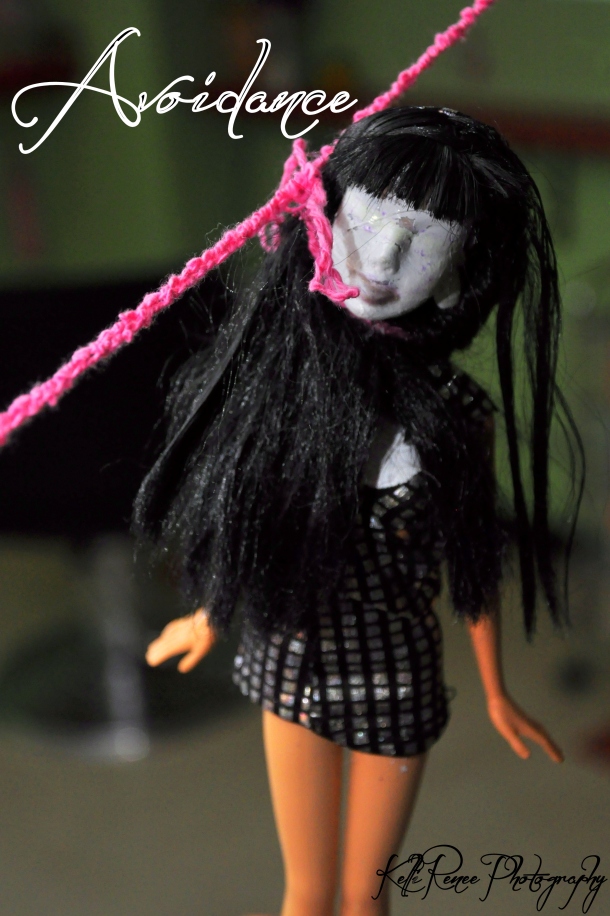 Please help me name this image ….
In the end I discovered…..

….. that being yourself, is what truly matters!
*As an aside – I once applied for a job. The boss looked up my site online and when I went to the interview told me I should remove this article as it was offensive and made me look like a lunatic! I didn’t get the job, and after that wouldn’t have wanted it. Was she closed minded and lacked creativity or did she just neglect to read the introduction and make assumptions?