I was just reading Lesley Carter’s (Bucket List Publications) story about Bermuda. She wrote that she took the day to relax and had tuned out what the guide was telling her about the island. It  made me think of my visit there in 2000 and I wanted to see what I remembered or learned.

I had met a woman in Barbados the year prior (she was an former politician of the Caribbean States)  and she had invited me to Bermuda for a visit.

The moment I stepped off the plane she rushed me to a funeral, no time to freshen up. Her nephew had run his motorcycle into a tree, (I would be sleeping his bed for the duration of my stay.) It was interesting and I felt very out of place.  When the mother of the deceased boy stood and started singing, “You are my sunshine, my only sunshine…” which I always sing to my son, I just about lost it and became very homesick.

Two days later, we were on the patio of a fabulous stone mansion situated on the beach attending Louis Furtado’s wedding who, I was told, is Nelly Furtado’s cousin, but I never did verify that.

Bermuda is a world of it’s own. I spent three weeks there, frequented many bars and restaurants and not once paid the tab. Seems someone else always beat me to the punch then disappeared before I could thank them.

This happened most often at my friend Mr. Thomas’ restaurant downtown Hamilton. Fred Thomas was an older gentleman who actually held the featherweight boxing title in the 50’s. He was a romantic man who used to push his wife around the city every year on their anniversary in a homemade cart with an umbrella, he had created just for her.

For the life of me I can’t remember the name of his place, I will wrack my brain, but I used to program his computers and slot machines  in exchange for personal tours around Bermuda at night.

There was one pink coral beach in the south, hidden in a little cove which is most likely over developed now; Mr. Thomas would sit on the beach waiting patiently in the dark as I entered the water and drew pictures among the  phosphorescent plankton. 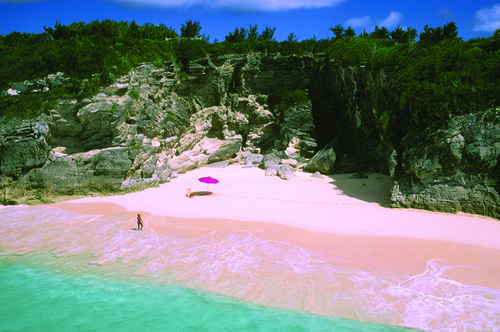 He explained to me how the island was so small, grown children starting families of their own had to build additions and extensions on the side of the parents home. His home had two – one for his daughter’s family, and one for the son’s. Bermuda is only 22 miles long and 2 miles across at the widest point!

At the graveyard my first day, I was surprised to learn that people are buried on top each other, separated only by banana leaves and other sorts. Cement structures sit over the grave, the lid is slid aside and family members are stacked in layers.

Bermudians hate frogs, so if you ever catch a ride on a motorcycle, hang on tight and lift your legs because the driver will use any maneuver to squash them. This can be very nerve wracking, especially near the hair-pin corners that you can only see around by a mirror on the side of the road.

Bermudians rely heavily on lineage to determine if an unknown person is worth knowing. And Lord help you if you decide to befriend a person before your host can determine their worth. You may find yourself sleeping outside like I did!

My host Lorraine, was a heavy drinker and a relatively large lady. Her and some friends had decided we should attend a cricket game. As we piled into a miniature car parked hazardously on her hilly street, the brakes began to whine and I became nervous. (Bermuda is very hilly, liken it to San Francisco in spots, it is hard to landmark and the ocean is barely visible in areas outside the city.)

There were four of us, three very overweight and drunk, and myself. As we careened around corners, speeding down tiny, winding roads, I couldn’t wait to get out at the game. As that day progressed, and they continued to drink more, I decided it would be best to find another way home. Taxi’s were out the question, there weren’t any and no phones, so I befriended some strangers; and slept outside that night wearing all my clothes from my luggage which had been thrown on the steps.

Let me tell you, it is cold on this island in May! But the little lizards tried to keep me warm by creating friction as they ran across my shivering body.

Another thing that shocked me was the souvenirs. Do you know, it took me forever to find one that wasn’t made in China? It was made in Africa!

If you make it to the historic little town of St. George’s, have a look at the Dunking Chair. It is here I was told, suspected witches were dunked in the sea. If they survived they were witches, if they died, they were not. (I see now the story has changed somewhat and it was apparently used for gossips and women who upset the peace.) Regardless, it is still there and re-enactments are a tourists delight. There is also a stockade in the main square where you can break for a photo shoot.

Museums in St. George’s have very little in the way of black history and that was highly disappointing to me. But there were some highlights; swimming with dolphins and eating the best flavored rubbery conch I have ever had.

The most exciting moment, was touring the island in a boat (Wild Cat Tours) that was propelled by two diesel engines, like those in a semi. They tell you sit back and relax on this high speed tour, and you can, if you don’t sit at the very front like I did. Have you ever been whipped in the face with your own hair? It brings tears to your eyes and you may end up missing something fabulous!

Bermuda is a great little place and it is home to the worlds smallest, working drawbridge (Somerset Bridge) measuring 22 inches. I wish I had some images to accompany this story, but that was a lifetime ago and many roads traveled.

…And did I tell you? Bermuda is also the place I turned down a marriage proposal and $47,000.00 engagement ring from a 75 year old American man. If I would only marry and take care of his daughter, who suffered head injuries from a fall from a horse, I would have had a beautiful home overlooking the sea, and 56 foot yacht I could see from the infinity pool.

Keep and eye out for the Moon Gates – The moon gates are an architectural element borrowed from the Chinese, they are simply an inviting entrance way to a garden and are thought to bring good luck to newlyweds….Bermuda has some fabulous arches across the island, especially those hidden under pomegranate trees during the summer… Also something to note: the Poinsettia trees are as large as a big oak tree, and we use them as an ornamental!

Last but not least, a visit to the Crystal Caves is a must!

Bermuda, a different world, a little paradise – and with the exception of my host, the people are phenomenal.

Well worth the visit! I remember more than I thought I did!

I hope Mr. Thomas is still alive and pushing his wife around Hamilton …

9 thoughts on “Bermuda, A Different World – A Little Paradise”